From the 22nd to 24th of July, our first alternative program for the cancelled FrogLabs took place in Bonn. Due to the corona pandemic, the FrogLabs, which usually take place during FrOSCon, have been moved to two separate dates. The second event will take place in September. With 16 participants and 11 tutors and supervisors, we camped on the youth campsite in Bad Godesberg and held workshops for two days. Since there were very few participants and many tutors, any participant was able to take part in different workshops on both days. Our workshop offer included game programming, handicrafts (mechatronics) and creative work. In addition, a workshop on OpenStreetMap was offered on the second day of the programme. 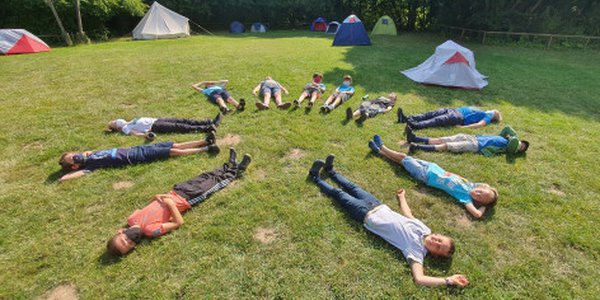 For our members, the Froglabs began on Monday, July 20th. Starting at noon, we arrived and built up our tents. Subsequently, the workshop teams began their final preparations. In addition, the system administration team was involved in the build-up of our network. In the Mechatronics team, a presentation on the introduction to electronics was discussed for the last time and the material was made functional. The Creatives team got acquainted with the new audio equipment, made test recordings and searched the campsite for different ways to generate sounds. Meanwhile, the game programming team also prepared a presentation and introduced Jacob, who wanted to help spontaneously as a tutor, to the topic. After that, we had a barbecue and at the end of the day, the whole team sat by the campfire to bake stick bread. 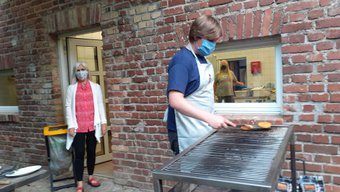 The second day of preparation was very similar. After an extensive breakfast consisting of scrambled eggs and pancakes, the workshop preparations were completed. The mechatronics team did a few test setups, the creative team created an example radioplay and the game programming team optimized the converter, which turned the coordinates from the GPS device into coordinates for tiled that could be used in games.

On Wednesday the participants were supposed to arrive, so the campground was cleaned up, the final preparations were completed, some shopping was done and the workshop rooms were set up. Starting at 1 p. m., the first participants arrived. After the tents had been set up and everyone had registered, there was a welcome address with a guided tour of the campground.

Afterwards, the children could go geocaching or simply had free time to get to know each other better. The children also organised a zombie ball game on their own. After a barbecue, there was the opportunity to sit by the fire again. Another group went with Jürgen, the head of the campground, on a nice night hike across the woods. 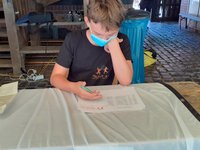 After breakfast the next day, the workshop teams were assigned. In the Mechatronics workshop, the participants were able to build their own solar car and customize it. Very beautiful and above all very different cars have been created. During the Creative Workshop, you were able to create a radio play. For this purpose, several sounds were recorded in the woods, which were later incorporated. During the game programming workshop, the campsite was measured using GPS devices and turned into a map with Tiled. Then you could use it for your own game.

After the first working phase, a longer break was planned, but at the request of the participants, it was possible to continue working earlier. In the evening there was again the opportunity to geocaching. After dinner, there was bread by the campfire and the opportunity to play Performous, an open-source singing game that works similar to Singstar. 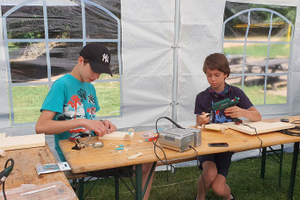 Friday was the last day. After breakfast, the tents were dismantled and the campground was cleaned up. Subsequently, the workshops continued. You could choose whether you wanted to continue working in the workshop from the previous day or try out a new one. In addition, the OpenStreetMap workshop was held, where participants learned how to edit maps in OpenStreetMap. For this they first explored the campsite and then put its details in OSM in the appropriate place. At about 5 p. m. the parents arrived and the participants presented their results. Unfortunately, the solar cars could not be presented, as it was overcast after a sunny week and the cars could not move. 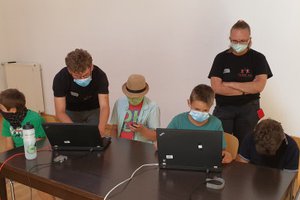 Despite the unusual conditions, the FrogLabs were once again very successful. New workshop concepts have been tried out and, due to the small number of participants, they could also be carried out almost without any problems. During the workshops, very nice results were produced.